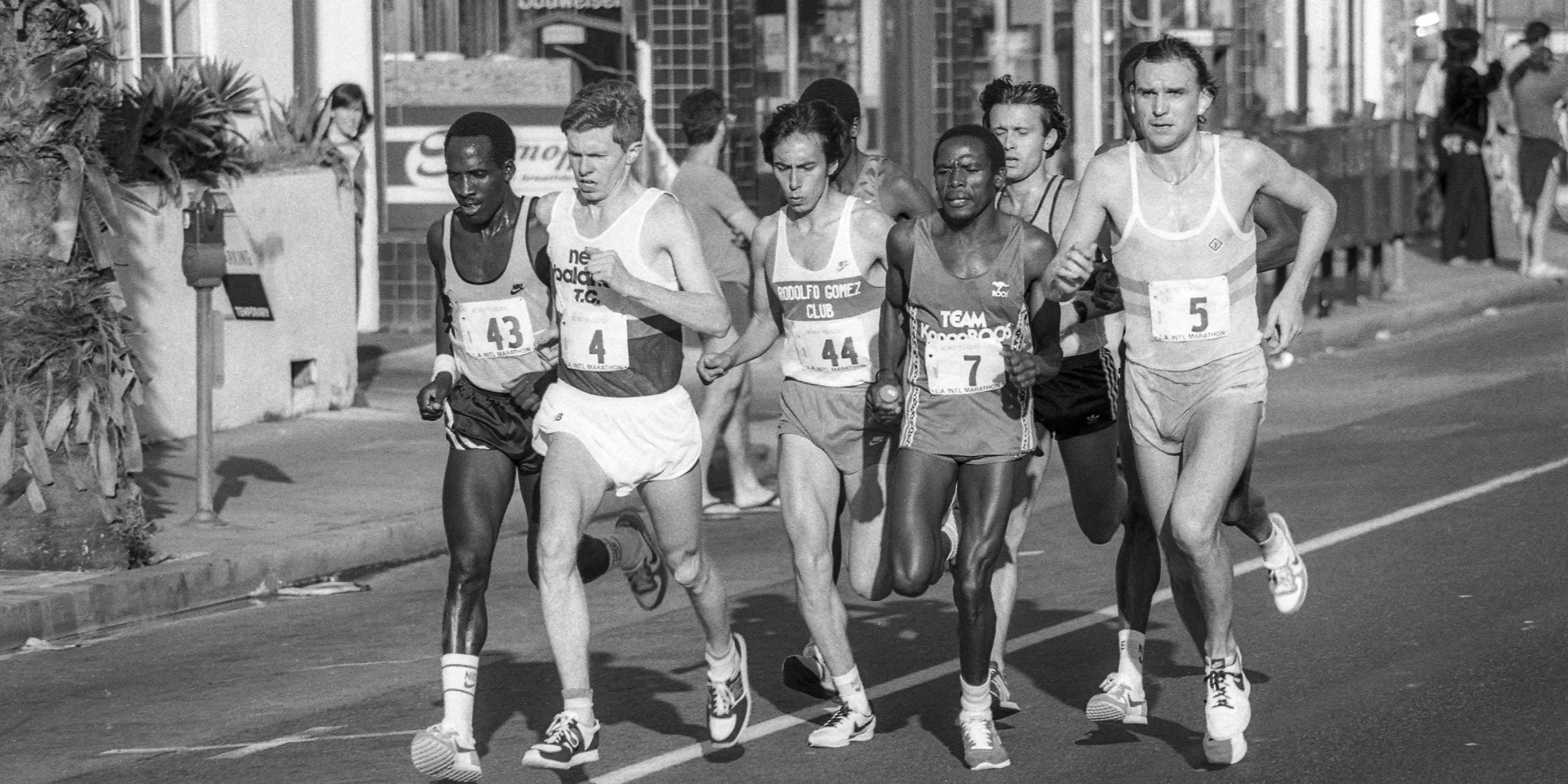 I have been struggling with mile markers for years. No one sees the damn things. I’ve had client race directors try flags, inflatable arches, 12-foot-tall towers, A-frame signs, you name it. Former Olympic pole vault gold medalist and race director Bob Seagren sent me a photo one year of him standing inside a frame he’d made out of PVC pipe.  “Can you print a cover for this?” he asked. So we did. Dancing mile markers. Great concept, tough to execute. Bob couldn’t recruit enough people to stand inside a box for the better part of a cold December morning.

I think we’ve been looking in the wrong direction. Literally. When it comes to wayfinding in general, big and tall is usually best. Put 5,000 athletes in a parking lot and the only way to tell them where to go is by putting destinations and arrows up high, above their heads. 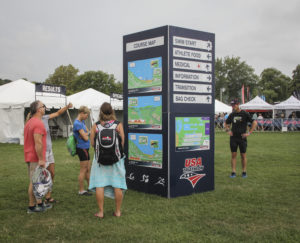 Before and after the race, height is good. But during? Maybe not so much.

But during the race? Not so much.

When I recently ramped up promotion of our street graphics program, Brandon Hough (Advanced Running Project/U.S. Air Force Marathon) had a typical response: “It’s funny you mention that runners are looking down. Last year I had beautiful 13′ tall feathers at every mile.  Had a runner tell me afterwards, “Loved the race, but wish you had mile markers… Runners have such a bad habit of looking down!”

How many hundreds of times have you heard something like that?

But the fact is, looking down is not a bad habit. It’s what runners do. Even good ones. Hell, the Africans look down, for heaven’s sake. Not at their feet, of course, but down, as in out in front of them. At the road.

Writes Bretta Riches in the online publication Run Barefoot: “I talk a lot about looking down when forefoot running, primarily because most of the best distance runners in the world tend to stare at the ground when they run. Throughout (the) entire race, these runners look at the ground and rarely stare straight ahead.”

It makes sense. If we all looked up or stared straight ahead while we were running, half of the global running population would be stepping into holes and onto rocks and hobbling around with chronically sprained ankles.

Ashley Mateo quotes USATF certified running coach Kelli Fierras in runnersworld.com: “Be sure to gaze directly in front of you. “Don’t tilt your chin up or down, which happens when people get tired.”

What the heck have we been thinking? The answer has been sitting there right in front of us (hah!) for all these years. Mile markers don’t need to be UP, they need to be DOWN. Because that’s where runners are looking. 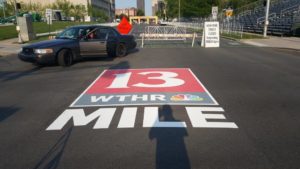 Mile markers on the street are hard to miss. Even for runners.

Which brings me back to street graphics. In fairness, this solution probably has not been more seriously considered in the past because the right product has not been available. But there are several products on the market now that are viable, including the one we use here at MPA Event Graphics. It’s called Asphalt Art®, and in my experience it’s the segment leader and meets every requirement:

The one drawback is that street graphics are single-use products. One and done. So you need to pay for new mile markers every year.

But the creative branding potential is so great for this material (I’ll stick to Asphalt Art® because that’s the one I use) that it almost demands to be re-imagined on an annual basis. We can die-cut Asphalt Art® to any shape (including sponsor logos), so it’s not only a great sponsor activation tool, it’s a sponsor magnet.  If you can’t get someone else to pay for your mile markers, you aren’t trying.

Bottom line: Street graphics are the future of mile markers. You might even say the outlook for mile markers is looking… er, down.

Give me a shout: mike@mpagraphics.com. I would love to work with you on this. (For more on our street graphics program, click HERE.)

Until next time. Be well. MP

Puttin’ on the Ritz